Our meeting place sponsor, Kearny Pearson Ford will be hosting the Mustang Festival at their dealership. It is also a charity event to benefit Meals on Wheels and the Monarch School.

KGB radio personality will be on site broadcasting, BBQ burgers and hotdogs provided by Kearny Pearson Ford. There will also be raffle. All donations from food and raffle will go to the charities.

We need to have a big showing to support and thank the folks at Kearny Pearson Ford for allowing us to use their facility to have our monthly meeting.

Stay tuned for meet up location and time so we can cruise into the show together. Thank you all for your support.

SAN DIEGO – July 3, 2013 – Kearny Pearson Ford and the Mustang Club of San Diego will be hosting this year’s Mustang Festival on Sunday, July 21st from 11:00 A.M. to 3:00 P.M. The multiple-year President award-winning San Diego Ford dealership will be offering special event pricing in conjunction with the event. The event is free and open to the public and visitors will see the finest classic and custom Mustangs from the MCSD, SVTOA, and Wicked Stangs Mustang Clubs. The event which was held last year by Kearny Pearson Ford will once again feature BBQ and entertainment. A new addition to this year’s event will be the focus of raising funds and awareness for Meals and Wheels and Monarch School.

The Mustang Festival will include exclusive Mustang displays along with vintage classic Thunderbirds of SD. Vice President, General Manager Doug Davis said, “I would like to personally invite all San Diegans and supporters of KP Ford and Mustangs to a day of food, music, and the opportunity to help support some great causes in our community.” Enjoy BBQ courtesy of Kearny Pearson Ford and live music by Mark Huston and the Workin’ Men. Kearny Pearson Ford will also be highlighting a special selection of new and pre-owned Mustangs.

All proceeds from the event will be donated to locally based charities Meals on Wheels and Monarch School.

Let's have a great showing to support the dealership who host our monthly meeting and support these charities.

Are we going to cruise up there? Where do we meet Danny?
S

Well my car was side swiped Friday night so I don't know if I will make it on time...will be working on it to even make it look good first before I take it out again to a show or cruise :-(
S

JENNsWKDstang said:
Well my car was side swiped Friday night so I don't know if I will make it on time...will be working on it to even make it look good first before I take it out again to a show or cruise :-(
Click to expand...

So sorry to see this. You can still come and hang out with us. We don't mind if you still bring your car.

I have to remove the rear drivers side quarter panel to get most of the dent out and polish out the other cars color that was transferred...we will see what happens this week with that....

Donator
I'll be in the field this weekend. :/ have fun fellas!

Got the duty blues again.
S

Alright, see all those coming tomorrow at the meet up spot at 8am.

Should I put all my race stuff on lol

I will see you all at Star Bucks
S

northerncountry said:
Should I put all my race stuff on lol
Click to expand...

Sure. I think that would be cool

If I can get up in time I just might make roll out time...see you all tomorrow

Thank you to all those who showed up for today's show. Wicked Stangs was represented by 21 cars. WOW!!!! Great job guys. KP Ford was very appreciative of our show of support. Thank you again. 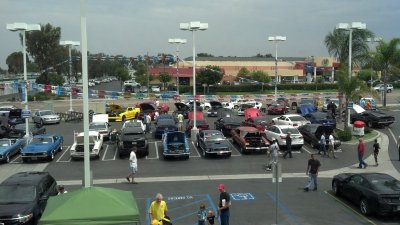